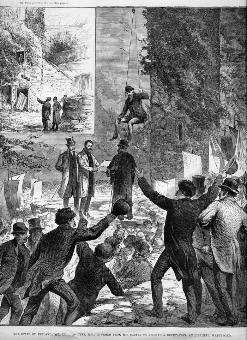 One of the most bizarre incidents in the Land War was the self-imprisonment of Jasper Douglas Pyne in his Castle at Lisfinney. Pine was an M.P. at Westminster for West Waterford, and an ardent advocate for the rights of the Irish tenant farmers, so much so, that a warrant was issued for his arrest. In a safe retreat in an upper storey, having previously destroyed the entrance to the Castle, and laid in every comfort for a protracted stay, he retired. A pulley and bucket had been fixed to the third floor and this became his "hall-door" where he received his visitors. Some evenings when there was a crowd gathered Pine would descend on the pulley and dangle 30ft above them and address them, while the police looked on helplessly, writing down carefully every word he said.

On the night of November 9th, 1888, the people of Tallow marched to the Castle led by the town band. Thousands of visitors came to Lisfinney day after day, encouraging and cheering Mr Pyne.

On December 12th, Pyne addressed the crowd at Lisfinney for the last time. Dangling over their heads in the bucket he amused a throng of some 5,000 as he spoke to the people and told some jokes, one such joke:- "it is said that it Is lucky for a Bride to meet a sweep on her wedding morning, but where oh where does the Sweep always look down on the Bride?" In Tallow, of course!" The following day he was gone, having passed unrecognised through the Police cordon and the cattle were driven in earlier to surround the castle. A year later he was drowned while crossing to England on one of the Cork Steamers.