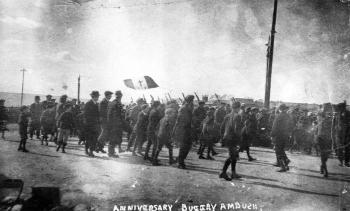 A fortnight after Durrow, the Burgery Ambush took place on 19th March 1921. It is very difficult to describe this as an "ambush" in the strict sense of the word, as there were several smaller engagements within the main attack, and furthermore the main attack did not take place at the position planned, but was just a hurried interception of British Forces, and shortly beforehand the Volunteers did not know that there was going to be a fight.

In order to interrupt communications between Cloncoskerine (which was a military post) and Dungarvan, it was decided to demolish Tarr's Bridge by the Abbeyside and Dungarvan Companies on the night of 18th March. The A.S.U. were to act as protection party for demolition squad. Earlier that night 5 members of the A.S.U. had gone to Dungarvan to attack an R.I.C. patrol, which they did, and after an exchange of shots, they withdrew, and rejoined the main body of the A.S.U. at Ballycoe as previously [arranged]. While they were [discussing] there, about the demolition, motors were heard and their lights seen coming from Dungarvan and going in the direction of Cloncoskerine. This was about 11.30 p.m. It was learned afterwards that there was a hostage in a lorry and that they were going, not to Cloncoskerine, but to Garranbane, where they arrested a Volunteer. With the A.S.U. at Ballycoe, were the demolition party from local companies, armed with pickaxes, crowbars etc.

When the enemy lorries were observed going towards Cloncoskerine a hurried consultation took place between the officer at Ballycoe Cross, and as it was nearly always the custom of the enemy not to return by the same route which they had taken going out, it was thought that the enemy would return by Ballycoe, and for this reason it was decided to place some of the A.S.U. on the road at the Burgery, and the remainder took up position on the Military road at Ballycoe. At about 2.30 a.m. on the morning of 19th, the enemy [20 men, 1 officer] party which consisted of a Crossley tender and a motor car were returning, it was seen, that on arriving at Tarr's Bridge they took the main road into Dungarvan. The Volunteers at Ballycoe proceeded with all haste to join their comrades at the main road at the Burgery.

Before they reached them, fire had been opened on the leading car by the party already in position, while some of those who came from Ballycoe attacked the lorry, others rushed to the attack of those in the car. The car had proceeded after being attacked a short distance towards Dungarvan, and then stopped, the occupants got out, and returned to the assistance of those in the lorry. Fighting took place on the main road, and the enemy retreated and then ran pursued by some of the Volunteers and were caught after a short chase. Among those captured was O/C enemy troops in Dungarvan – Captain Thomas and also an R.I.C. Sargent named Hickey, who had been acting as a guide, as well as some private soldiers.

Hickey was afterwards shot, as he had been warned on a number of occasions previously to refrain from certain activities and he had failed to do so. Meanwhile the enemy in the Crossly lorry had given up the fight and had retreated across the fields, leaving behind them, their lorry and some equipment. The lorry and the car were then destroyed.

Seanacawl
While all this was going on an old itinerant flute player called "Seanacawl" wandered on to the scene. He was told to get out of the way, which he did. When the Volunteers regrouped at about dawn at Kilgobinet, who should show up again but "Seanacawl". Again he was advised to move on quickly and obliged. Commandant Plunkett, who was with the Column remarked: "Well, one thing he can say is that he saw the English running from the Irish".

At Kilgobinet it was decided to send back a number of Volunteers to the scene of the ambush, to collect any arms, ammunition or equipment left behind in the darkness during the fight of the night. They proceeded across country, and were approaching the Burgery, when fire was opened on them by an enemy party that had come to try to retrieve what was left of their transport. The Volunteers were now in an open field without any cover, whereas the enemy were lined on the road firing from the cover of the fence. The Volunteers returned the fire and a sharp fight took place, until eventually the enemy retreated back to town. During the fighting Sean Fitzgerald, Captain of Killrosanty Company was killed, and Pat Keating of the Comeragh was wounded. When Keating was hit, George Plunkett left his position while still under heavy fire and carried Keating to some cover. It is interesting to note here that Plunkett did a similar brave act, when, during Easter Week, 1916 he dashed out of the G.P.O. and went to the assistance of a British officer, wounded during the fighting.

Their first concern now was to have Pat Keating attended to, and this was done by two ladies of Cumann na Mban. He was taken to Monarud, where he received medical aid from Dr. Hackett of Dungarvan, but Pat Keating died later that evening at about 5 p.m. Considerable enemy reinforcements now arrived from Waterford City, with armoured cars and lorries, and carried out widespread searches in the district, but by then the Volunteers had gone to the safety of the Comeragh Mountains.