21. Ballyvoile & The Kilgobinet Booby Trap
Previous Page | Next Page
Ballyvoile (6th June 1921)
On the 6th June 1921, a military cycling column of about 30 men were ambushed at Ballyvoile. Tom Keating of Comeragh, a brother of Pat's who was killed at the Burgery was in charge of the ambushing party. It was first decided that the enemy should be attacked at 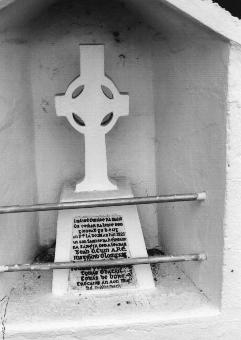 Kilminion, near Stradbally, where the County Council quarry now operates. They lay in waiting for a time, but then received word that the British were returning by the lower Coast Road. The Volunteer party hurriedly made their way across country and had just reached Ballyvoile, when a volley of shots rang out. Evidently the military had seen them moving into position. Two of the soldiers moved into higher ground and opened fire again, and this time, Jack Cummins of Stradbally was shot just as he was getting over a barbed wire fence. The Volunteers returned the fire forcing the military to take cover. The fight lasted about half an hour and then the Volunteers had to withdraw due to lack of ammunition. A plaque to the memory of Jack Cummins can be seen at Ballyvoile.

Kilgobinet (9th July 1921)
On the 9th July, two days before the Truce, a very unfortunate incident took place at Kilgobinet. This is called the "Kilgobinet Booby Trap". As I've mentioned earlier, a very necessary operation at the time was to erect road blockages and trenches at different points, in order to impede the movements of the enemy throughout the countryside. One of these trenches had just been opened at Kilgobinet, on the road leading up to the local church, but the Volunteers had to partly fill it in again to allow a funeral to pass over. While the funeral had gone on to the Church, a party of military came on the trench and carefully hid some land mines in it. Later when members of the Colligan Company I.R.A came to reopen the trench, they disturbed the mines, which exploded, killing six and wounding several others.