3. The Ulster And National Volunteers
Previous Page | Next Page
Ulster Volunteers
When the Home Rule Bill looked likely to be passed the Orange element in the North, led by Carson formed the Ulster Volunteers to resist by force if necessary, any type of rule other than English Rule for the Irish people. This led to the founding of the Irish Volunteers in the Rotunda in Dublin in November 1913. The call was taken up with enthusiasm by young men and old in every parish. They practised foot drill, route marches and exercises with wooden rifles. The O'Rahilly and many other leaders visited this county on organising tours and addressed meetings in many places. In a few cases Volunteers had managed to obtain rifles by purchasing them from British Soldiers and licensed [arms] dealers. Some places had three or four Companies of Volunteers and they elected Company Officers, so in a short time the movement became a strong and virile force. Volunteers paid a few pence weekly to purchase arms from G.H.Q. 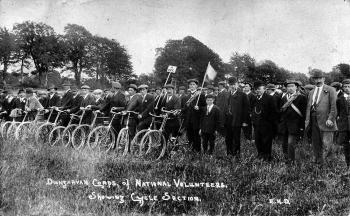 When John Redmond, the Leader of the Irish Party saw they were becoming such a force, he decided to step in and try to get control, which he did, and got his nominees on the Controlling Committee of the Volunteers. At this time the [World War 1] was on and on the 3rd August 1914 he said that Ireland would be defended by the Volunteers and he refused the request of Kitchener to have them sent overseas. Yet he seems to have changed his mind because three weeks later, on the 20th August he said, in a speech to the Wicklow Volunteers [at Woodenbridge] that "The interest of the whole of Ireland was at stake in the War in Europe and he urged them to continue training and drilling and to consider themselves as men, not only in Ireland itself but wherever the firing line extended in the European War. This meant he offered the services of the National Volunteers to the British Government to fight England's battles. This caused a division in the Volunteers. Those following Redmond were known as the National Volunteers, while those who adhered to the principles of Pearce were called Irish Volunteers. As a result of this members of the Irish Volunteers became greatly reduced, while the others gave their services to the British effort. It was a regular sight at Railway Stations to see the townspeople waving Union Jacks as they bade good-bye to those departing to military depots and munition works. The Separatist National and Republican spirit was at a very low ebb.