4. The 1916 Rising In West Waterford
Previous Page | Next Page 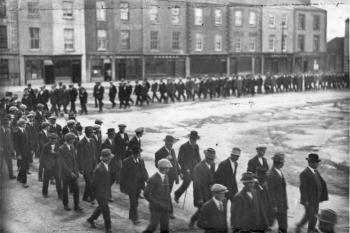 The few that remained in the Irish Volunteers (about 5%) continued to exercise drill and train. Recruits were taken in but a careful selection and scrutiny was made of each individual. Their movements became more secret from now on, and drilling took place only in secluded places, as they were constantly under observation by the Police. British Police Agents became more busy and generally a plain clothes detective was on duty at all stations and towns, checking on suspects. Also at this time where possible, A Unit of Cumann na Mban was formed.

Cumann Na Mban
These were a very valuable section of the Movement, and they acted principally as Despatch riders, and also helped by making haversacks, first-aid dressings, signalling flags, bandages, and took classes in First-Aid also.

O'Donovan Rossa Funeral
All these preparations and drilling were part of a plan for an armed uprising. The funeral of O'Donovan Rossa in 1915 was of tremendous significance, and Volunteers from the County attended it. Pearse's oration at the grave-side was prophetic and could be understood by all Volunteers that something more than parading was afoot.

Dungarvan Position
At this time the arms position in Dungarvan was about a dozen Martini Rifles, three or four Revolvers, and a few shotguns with home made bayonet attachment. Other places throughout the County were [no] better off. Harry Boland, Sean Etchingham, and Liam Mellows were now regular visitors to County Waterford, and they kept local officers informed of developments. On one of these visits Mellows transferred most of the Martini Rifles to Waterford as there were not sufficient men in the district to use them.

Easter Sunday
The general orders for mobilisation on Easter Sunday 1916 was received in [West Waterford]. All [Vols with] equipment and full rations were to be on the ready. Mr. P.C. O'Mahoney of Dungarvan Post Office was Q.C. of the district at the time. In his report afterwards he states that his instructions were that the Rising was to take place at 7 p.m. on Easter Sunday. He received this order from Miss Perolz, who had come from Dublin on Holy Thursday. He gave her a receipt for the message, and she asked Mrs. O'Mahoney did she realise the seriousness of it. Miss Perolz left Dungarvan by train for Cork.

Good Friday
On Good Friday P.C. O'Mahoney called the men together and told them to be ready at 6.30 p.m. on Easter Sunday. Also on Good Friday he sent the despatch he had received from Dublin to Waterford. His wife and Miss Broderick, Abbeyside, took the message to Waterford.

Easter Saturday
On Easter Saturday morning, they met Sean Matthews in Waterford and showed him the message. He read it and said to tell O'Mahoney that it was called off. He had received the countermanding order from J.J. O'Connell (Ginger) who had come from Dublin, and he (Matthews) told the ladies that O'Connell was then at the Metropole Hotel. They went to the Hotel and found that O'Connell had gone to the Railway Station. They met him at the station and he told them that what Matthews had said was correct and that the Rising was off, as he had come straight from Dublin with the instructions from Eoin MacNeill. [Willie Walsh had also got O'Connell's order].

On Easter Monday O'Mahoney was on the phone to Cork and was told that the Rising had commenced in Dublin. While on duty later that day, a code message came through for the District Inspector from the County Inspector in Waterford. He [(O'Mahoney)] had the key to the R.I.C. cipher and decoded the message. It was to the effect that an ammunition train without lights would pass through Dungarvan Station at 12.15 a.m. with a small military Guard, and instructing the D.I. to see that it passed safely.

O'Mahoney got in touch with local Volunteers, and it was decided to capture [or hold up] the train. It was then about 11 o'clock on Monday night. The Railway line was dismantled and a blockage set up. No train came at the expected time, but eventually one did come in at 4 a.m. The Guard got out, he was questioned, the train was searched and was found that it was an ordinary goods train. There was no military or arms on it.

Confusion
As can be seen from this report, confusion was rife throughout the Country. Waterford was no different to [other places]. It must, however, be noted that the men were prepared to Rise, and in Dungarvan's case, took part in an actual operation, even though the train did not contain any munitions, arms, [or escort].