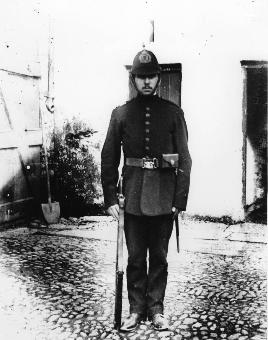 About 1918/19 Police Barracks were sniped and attacked. Police were disarmed while escorting mails and doing patrol duty, and life generally became uncomfortable for them. The R.I.C. held posts everywhere. The term "policeman" is a bit misleading as regards the R.I.C. as they were never policemen in the strict sense of the word……they were well armed and were the eyes and ears of British Law in Ireland, and were kept at a strength out of all proportion to a police force. There was hardly a village which did not have it's R.I.C. Barracks. They enforced British rule and spied on the people. Due to these activities, they began to be boycotted. In some instances they had to be removed. They got nervous in their Barracks and got trigger edgie as is instanced in the shooting of Michael Walsh at the R.I.C. Barracks in Ring. This was accidental but the R.I.C. thought they were being attacked and shot Walsh. Many of them resigned due to the hostile attitude adopted towards them, although some few of them may have had some bit of patriotism. Their Barracks were attacked in many places and later they evacuated the smaller [ones], which were promptly burned by the Volunteers to prevent re-occupation. They concentrated their forces in the larger towns.

Military Black and Tans
The enemy now started to re-enforce. The Black and Tans (who were not of a very high standard of British manhood) were drafted into the country. They got their name because of the colours of their hastily got together uniform….they wore a black tunic and tan or khaki trousers. They were augmented by the Auxilliaries who were a corp of ex-officers of the 1914 – 18 War. The military extended their forces…….places like Lismore, Dungarvan, Cloncoskerine, Ballinacourty (Marines), Ardmore (Marines) set up strongly fortified positions. They were well equipped with the latest fast moving transport and armoured cars.

Martial Law Curfew
The area was declared a Martial Law area and Curfew as imposed. House searches [local man made key and sent it to the Barracks] were regular and many Volunteers had to go on the run. Training, drilling, and organisation was now intensified. As well as the ordinary military duties the I.R.A. was also responsible for the maintenance of law and order.