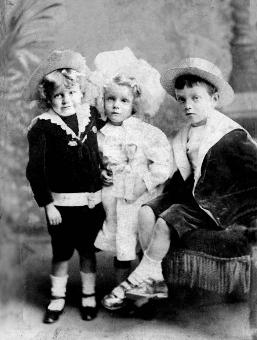 And here is Mallow where Canon Sheehan, the Irish Balzac, grew up and had his being. Unlike Tolstoy, he was close to the peasants and could communicate with them. There is a deep knot of sadness in his novels as those not so simple people at times frustrated and disturbed him with their combination of viciousness and goodness. The graves at Kilmorna were his last and his greatest work. When I was a Fianna boy the book was awarded to me as a prize for an essay I wrote for the "mosquito" press ("Daring Deeds of Irishmen" - Sarsfield at Ballyneety, of course).

There is an unforgettable chapter in the book where a typical politician is haranguing a crowd in vile Irish rhetoric. (Applause, loud cheers and laughter, loud and prolonged applause). Nearby a young Fenian listens in despair. This passage caused me to shed tears as a boy.

Glenanaar, his most popular work, begins with the truly inspired idea of an infant (Nodlaig) being found in the bales with the cattle on Christmas night, the impact of the book's beginning is not maintained and the end of the novel is puerile. Lisheen has an idea worthy of Tolstoy; for a bet a landlord in disguise goes to live amongst a crude and ignorant peasantry. My New Curate - I may sometime read again.

When we were boys our most popular authors were G.A. Henty, R.M. Ballantyne and Robert Louis Stevenson. Another book we read and which caused much apprehension was Dean Farrar's, or Little by Little. Poor Eric was addicted to the bad habits boys are prone to and as a result he came to a sad and an early end. This dreadful production really scared us. Our most admired paper, or magazine, was The Union Jack Library exclusively devoted to the doings of a 'cool' and brilliant detective called Sexton Blake. Blake had a boy assistant, Tinker, who looked after the noble bloodhound Pedro. As we were intended to, we all identified with Tinker. Fancy, you did not go to school and you were apprenticed to a detective. Tinker always addressed his boss in the familiar 'guv'nor' but when the great man was called abroad, as his genius was in much demand, Indian princes respectfully addressed him as 'sahib' and Zulu impi chieftains called him 'baas'. Sexton Blake's most doughty opponent was a beautiful young French criminal lady named Yvonne (obviously in love with Blake) but whom he could never bring to book. Our patriotism arose with our puberty and we were enchanted by The 'Forge of Clohogue' and Hugh Roche, 'The Ribbonman', two novels dealing with the '98 Rebellion.

A reading of A.M. Sullivan's 'The Story of Ireland' clinched the matter and there and then was formed the secret, oathbound society of the Secret Snipers to which I was honored with the position of Head Centre. Barney Dalton wrote out the oath-binding codument in his beautiful script and we compromised by signing our names in red ink instead of with our blood. Our organization was formed for the purpose of sniping Redcoats when the longed for Rising took place. For practice in military tactics we manufactured a large home-made bomb which for some strange reason we planted in the front garden of a harmless old lady, a Miss Veale, who lived alone on the sea front. The resultant explosion terrified the town. Sad to relate there was an informer in our society (one of those brainy, owlish, bespectacled kids) and there were a number of very serious conferences with the police constables, our teachers and our parents. Let me draw a veil over the unfortunate sequel.