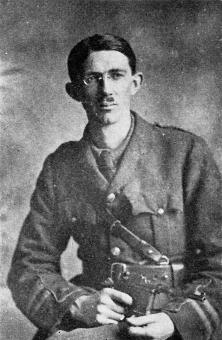 The events of 1920 in County Waterford as in the rest of Ireland cannot be comprehended unless we see them in relation to the happenings of the years which immediately preceded that year of armed action. I.R.A. brigades were the result of a process which began in 1913. They did not mushroom over-night.
Following a meeting in Dungarvan town hall in late 1913, companies of Irish Volunteers were formed in practically every parish of the county. In old Parish a company drilled twice a week with wooden rifles under the direction of Paddy Leahy, a British army veteran. In Dungar-van itself citizens prominent in the com-mercial life of the town were the backbone of the Volunteer company. These included Dan Fraher, a noted G.A.A. man; J. A. Lynch, editor of the Dungarvan Observer; John Boyle and George Lennon, son of the owner of the gas works. At the time of the Volunteer split most of the Co. Waterford companies were dissolved but members kept in touch with one another.

In Spring, 1916, Liam Mellows visited Dungarvan and met the local Volunteers. During Easter Week itself P. C. O'Mahony, Pax Whelan, and George Lennon quietly occupied Dungarvan post office and held up a train in a fruitless search for arms. They went home when they realised that the country at large had not risen. Two Waterford men, Liam Regan and Sean Graves from Ring were in the G.P.O., Dublin, in Easter Week.

On 20 October, 1917, Count Plunkett, Pierse Beasley, George Plunkett (son of the Count), and Harry Boland addressed a huge Sinn Fein meeting in Dungarvan square. Mick and Jim Mansfield rode in from Old Parish as part of a Volunteer cavalry section which acted as guard of honour at the meeting. Subsequent to this, George Plunkett travelled the county putting companies on a proper footing.

A Decies battalion was in existence by January, 1918. Eventually a brigade was formed with four battalions centred at Dungarvan, Lismore, Killrossanty, and Ardmore-Old Parish. This brigade, numbering about six hundred as yet unarmed men provided the foundation for future I.R.A. activity in the county.

During 1918 the brigade strove to arm itself for the expected struggle. Joe Wyse, the quartermaster, travelled as a ship's steward to Germany, Danzig and America, bringing back light arms each time. Arms were bought from G.H.Q. in Dublin while lighthouses and coastguard stations at Helvick, Mine Head and Bonmahon were raided, as were most of the county's "big houses." Buckshot for shotguns was made in hand-fashioned iron moulds. A local Swiss born jeweller, Oscar Bowman, gave his talents to this and kindred work. Bayonets were turned out at forges such as Pat Roche's in Old Parish and Mike Flynn's at Grange.

Battalions were put on a war footing at a meeting of the brigade staff in January, 1919, when it was decided to intensify pressure on the R.I.C. The murder by police of Volunteer Michael Walsh of Ring acted as a spur to his comrades. Walsh knocked on the barrack door to deliver a message and was shot dead.

Early in 1919 Ardmore R.I.C. barrack was attacked and a police patrol was dis-armed. George Lennon and Mick Mansfield took part in Liam Lynch's raid on Fermoy and following that action General Lynch stayed in west Waterford at Cooney's of Carraighroe. During the winter of I919 raids by R.I.C. and military on Volunteers' homes were of such frequent occurrence that the more active members such as Pax Whelan, George Lennon, the Mansfield brothers, Pat Burke, Ned Power, and Sean Goulding, had to hide out and live "on the run." By January of 1920 there was much activity in Co. Waterford. Before we describe the drama of that year we had better outline the stage on which it was enacted.

County Waterford is bordered bv the Suir to the north and east. Its coastline stretches from the Blackwater's mouth at Youghal to Waterford harbour. Between the coastline and the Suir lie the Knockmealdown and Comeragh mountains. These mountains provided, in the words of Ernie O'Malley, "a great base and shelter for guerilla warfare." Additional cover was provided by the Drum hills between Ardmore and Dungarvan, the Colligan woods, and the Nier valley between Dungarvan and Clonmel. The county contained about thirty R.I.C. barracks as well as marines and coast-guards. It was ringed by British military stationed at Fermoy, Clonmel, Youghal and Waterford. Naval destroyers and torpedo boats patrolled the coast. As the troubles increased, the existing crown forces were reinforced bv military, Black and Tans, Auxiliaries and Marines. 1920 began with a series of attacks on R.I.C. patrols and barracks. The aim was to undermine the morale of the R.I.C. to render them ineffective as a police force and to compel them to abandon their barracks. The seizure of R.l.C. small arms was another important object of these operations. West Waterford I.R.A. men did not normally attempt to gun down R.I.C. but their campaign against this force was, nevertheless, almost a total success and a model of this type of warfare.

For several months previous to January, 1920, Captain King, inspector of police for Dungarvan district, had been making a nuisance of himself. He went too far when he drove out to Mansfield's of Crowbally, Old Parish, and threatened to shoot Hannah Mansfield unless she informed on her sons. At that time Jim Mansfield was commandant of the Ardmore battalion, While Michael was brigade engineer. In order to curb Captain King's zeal, a group of Dungarvan Volunteers took the captain's car which was in a garage over half a mile from his house. They then pushed it through the town to his front door where they drenched it with petrol and set it on fire. Shortly afterwards the Captain was transferred to Mallow at his own request. This little operation was carried out by Pax Whelan, Joe Wyse, George Lennon, Pat Lynch and Pat Power. The fact that a group of Volunteers could destroy a policeman's car by fire in broad daylight in the centre of Dungarvan shows the power of the west Waterford brigade at this point in time.

During May, 1920, customs and exise offices were raided in Dungarvan and Lismore. Volunteers George Lennon, Mick Mansfield, Frank Ryan, and Sean Goulding carried out these raids at gunpoint, using revolvers that had been obtained in raids on R.I.C. and landed gentry. Important documents were seized and destroyed, thus crippling the British local government system.

Paddy Ormonde, police officer of the brigade, now began setting up his network of Sinn Fein courts. Working in conjunction with transport officer, Eddie Spratt, Ormonde soon had courts functioning in Ardmore, Cappoquin and Lismore. On one of his missions Paddy spied a military lorry slowing down near the hay field where he and other brigade members were having a council of war. The I.R.A. were hidden in haycocks by the farmer and his workman but the military bayoneted some of the cocks. Ormonde's leg was actually pricked by a bayonet but he survived to continue his police work.

Also in May an attack was made on Stradbally R.I.C. barrack. The Killrossanty battalion under Pat Keating and Ned Power lobbed home-made bombs covered with sticky yellow clay on to the slate roof of the barrack. They failed to adhere to the roof and bounced off before exploding so that the slates remained intact. This meant that the petrol which was meant to set the barrack alight could not penetrate the roof. The battalion was under heavy rifle and revolver fire from the barrack and having only shotguns and a few rifles they were forced to retreat to the Comeragh mountains. The R.I.C. realising that the next attack might succeed, vacated the barracks which was then burned to the ground by the Stradbally company.