8. Evacuation of the Barracks
Previous Page | Next Page
Extract From Keohan's History - by Edmond Keohan 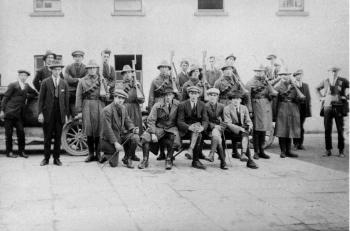 In writing of Dungarvan Castle and the Barracks, the terms must be understood to be synonymous. Since the castle was demolished the premises got to be known as the barracks, and it was spoken of as such whenever reference was made to the place. In the year 1921, when the troubles were on to the biggest extent, matters were shaping them-selves and exchanges of feelings were being made between those in high places on either side of the Irish Sea. The castle was occupied by the police force known as the R.I.C., and with them were the auxiliary police, or what were known as the "Black-and-Tans". The military had their quarters in Church Street, and the utmost precautions were continually taken so as to prevent a surprise. On one occasion in the summer of the year a bomb was thrown at the military post. A couple of the soldiers received slight wounds, but some young girls who were walking on the opposite side, close to the Convent wall, got more or less severely wounded. They were that night removed to the hospital, and in a short time got perfectly well. When the bomb exploded the military fired several rifle shots. People became alarmed, and there was a general run for cover, those who could making for their homes. The night was one of excitement. On a few occasions, as some of the military were making for their quarters from the town to the Union Hospital, where some numbers of them were located, they were fired on, and a sharp fusilade would follow. In this way matters proceeded till coming on the close of the year. Correspondence was being carried on between Mr. De Valera, who was President of the Irish Republic, and Mr. Lloyd George. The Prime Minister of England, land, which culminated in negotiations being agreed upon. Plenipotentiaries were appointed by Mr. De Valera, and they proceeded to London, where the conference was held Amongst the plenipotentiaries were Arthur Griffith and Michael Collins. After some days of negotiations, and when rumours began to appear in the Press to the effect that the conference would fail, the report was published on the 7th December, 1921, that the conference came to an agreement and the Treaty between England and Ireland was signed. One of the terms of this Treaty was that the English soldiers should evacuate Ireland, as well as the Black-and-Tans, and that the Irish police force should disbanded.
It seemed that a relief had come to the people. The Irish, with the exception of six counties of Ulster, were to have their own Parliament, the management of their own and they were to be enlisted as one of the dominions, having equal status with Canada, New Zealand, Australia, and South Africa they were to be empowered to raise their own army of defence and organise their own police force. But notwithstanding these arrangements, things did not get on well. A striking instance of the first appearance of the division which soon after made for the wrecking of the country was seen in Dungarvan. The members of the old brass band came together and resumed practices in order to jubilate over the victory gained by their leaders. But meantime a letter written by De Valera appeared in which he said that he was entirely against the Treaty, and that it was a document which he would advise the people not to accept. The practices of the band discontinued. Division crept in amongst them, and the split observable there in a small way was typical of the larger and fiercer split which soon widened through the country.

But, in accordance with the terms of the Treaty, preparations were being made for the evacuation of the barracks. All the police from the west of the county, as well as from several stations in East Cork, had been drafted into Dungarvan for security, and their force numbered at this time. A body of them used patrol the streets with loaded rifles, and in extended formation, but their work. of usefulness as a police force had ceased. A chasm seemed to have divided them from the people. 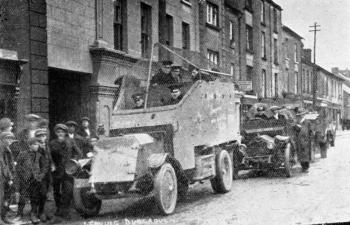 The occupants of the old Castle were now to be changed. The English forces were to leave; the old premises were to fall into the possession of the Irish people alone. This old fortress had in the olden time, before the building of Dungarvan Quay, been washed by the waters of the Colligan, and the sentries at night could listen to the swish of the waves as they beat against its ancient walls. In this defensive stronghold were garrisoned the troops of the English King, and kept there, with but little intermission, for 750 years. It was symbolical, in every respect, of British rule in Ireland.

Through the reigns of the Henrys, the Edwards, James the First, Queen Elizabeth, and the Georges, Dungarvan Castle was regarded as a fortress of immense significance. Despatches from the Court of England, orders from the English Parliament, frequently found their way to this old Castle, all giving directions for procedure for the protection of the British interests in the South of Ireland. Cromwell himself walked the ramparts. His iron mind, indeed, might have been softened with the lovely view that unfolds itself from the topmost walls, for the aspect of the sea and land is fraught with all that comprise beauty in the artistic modelling of nature.

It is said that when Cromwell stood on the heights of Killineen and viewed the waters around Dungarvan Bay, the Drum Fineen Hills in the distance, the diversified valley that stretched itself at both sides of the Colligan river, he exclaimed, "This is a country worth fighting for." It may be that he used the words elsewhere, but tradition credits him with having used them here, and however that may be, it is certain that the view from this eminence called forth the eulogiums of Thackeray and other famous writers who have toured the country.

The evacuation of Dungarvan barracks took place on the 4th March, 1922. The large square of the enclosure had been used for the purpose of keeping the motor lorries and motor cars, and it is from here that the military used issue forth on their raiding expeditions. The Black-and-Tans had gone away some days before the military had left the town, and the Castle was occupied solely by the sixty-five members of the R.I.C. They were under the command of Captain Sheehan, an officer who had fought in the Great War.

Taking Over the Castle
Before the police left some conferences were held in the barracks. An application was made to Captain Sheehan for possession in the name of the I.R.A.. He asked for credentials from the Provisional Government, for now, under the Treaty, the Irish Provisional Government was in power. Captain Sheehan did not consider those produced satisfactory. As a consequence, the giving over of the barracks was delayed until the 12 train came from Waterford, when a Commissioner from the Provisional Government arrived, and, driving in a motor to the barracks, he had an interview with Captain Sheehan. Captain Sheehan, being satisfied, handed over the control of the fortress to the representative of the Irish Government, and in a few minutes afterwards he formed his men four deep in the square, and giving the order "March," the men filed out of the Castle, passed through the massive gateway, and thus was ended, apparently for evermore, the symbol of British rule in this historic fortress.

It might have been two hours later that three motor cars drove down the street. In them were members of the I.R.A. They entered the barracks and installed themselves there, and within a few minutes the Tricolour floated from the ramparts of the building. These incidents in themselves were of tremendous significance, in as much as they emphasised the change that had taken place, that the rule of which the people had so long complained was at an end, and that the affairs of the country were now in the hands of their own representatives.

There were many onlookers at their doors and windows as the body of police marched up the street, headed by their Captain, en route for the railway station, to leave the old town for ever. Some of the men smiled greetings to their friends as they passed them by, others appeared to realise the changed position of affairs. A musical instrument was being played by one of the party, and the air "Good-Bye-ee" only indicated too well the meaning of the proceeding. Their departure was regarded with mixed feelings, and perhaps at the moment the mind was filled with kindly recollections. For, until the strife, these men and the public had got on very well together. They were regarded by the ordinary citizen as the protectors of the people's rights, and, apart from their position as representatives of a foreign power, they were, on the whole, held in high esteem. Indeed it might be said with truth that up to the last moment they could not bring themselves to think that their status was being brought down, that they, who were the almost absolute controllers of everything that pertained to the government of the people, were now to be completely dispensed with, and that all their ideas of constabulary life were to be dashed to the ground. Yet so it was. But reflections such as these must have seized them as they marched up the street, wheeled around the Square, and made for the steaming train in waiting for them at the station. When they arrived at the platform they were entrained, the whistle of the engine sounded, and the Royal Irish Constabulary were gone for evermore from the " Old Borough." Thus we had convincing evidence on that day of the vast change that had come over the government of the country. If unity could have prevailed, matters would have gone on well, but division crept in, armed bodies became arrayed against one another, and it would seem for a time that matters were much worse than ever before.

The great Dominican, Father Tom Burke, in one of his brilliant lectures in America, said that on the day when Ireland would be united there was no power would be able to keep them in subjection, and with reference to their condition he quoted the lines of the national minstrel, Thomas Moore:-

"They say 'twas fate, a wayward fate,
Our web of discord wove,
For where our tyrants joined in hate,
We never joined in love."

When the English garrison evacuated the barracks of Dungarvan and the premises were handed over to the control of the Irish soldiers, it was thought, and with some reason, that our troubles were at an end. Such an idea was, however, very soon to be dispelled. Subsequent history does not seem to reflect the glory which was once ours in the past, nor would it redound to the good sense or desire for the country's welfare on the part of its people. It was believed that when the Castle, now occupied with our Irish troops, was free from all outward molestation that the people's hearts would glow with pride and that a new enthusiasm would replace the lethargy which had prevailed for some considerable time.