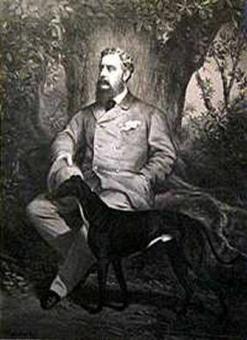 Lord Lurgan, trying for the treble, once again sent the Master with his trainer John Walsh from Ireland to England the following year. In sub-zero temperatures the course was declared fit for competition (although many disagreed) and the Waterloo Cup of 1870 went ahead.

This proved to be a disastrous decision for Master M'Grath and very nearly killed the great dog. The course was run on the Salt Marshes between the railway and the frozen river Alt. It should have been foreseen that several dogs might stray towards this treacherous strip of water - as did the Master - taking a tumble and crashing through the ice.

Lady Luck was with M'Grath that day. A slipper named Michael Wilson was over from Ireland for the Cup and it was his quick action that saved the great dog from a watery grave. He plunged into the freezing river and dragged a close-to-death Master M'Grath to the safety of the bank. It was touch and go for a while but the dog's stamina won through and he survived the trauma of the day.

The Master returned to Ireland and Lord Lurgan made the decision that the great dog's competition days were over and retired him to stud. Not that this decision was to hold firm. With the black greyhound now back to maximum fitness his lordship had a change of heart and entered Master M'Grath in Ireland's premier coursing event, the Brownlow Cup. Once again he saw off the opposition and won comfortably.

Now known as "Mighty" M'Grath by his huge public following, it was inevitable that Lord Lurgan should turn his attention to England as yet again the Waterloo Cup beckoned. This time the weather was clement, and no mistakes were made. Disposing of Mr Punchard's well fancied youngster named Pretender, the Master went on to clock up his "treble" in fine fashion and register his place forever in the greyhound history books.

Such was Master M'Grath's wide appeal to the whole spectrum of British society that he was invited to appear before Queen Victoria (a greyhound owner herself) at Windsor Castle. The meeting duly took place with the Master and his trainer John Walsh travelling to the royal occasion by train. This was certainly a fitting climax on which to end a truly brilliant career.