Housing Conditions In The 1880's 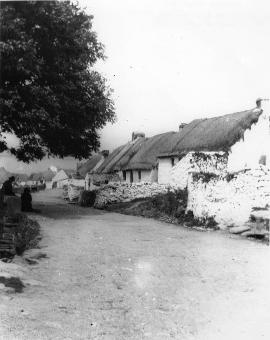 Of all the electoral divisions in the Dungarvan Union Ringville appears to have had the most serious problems as regards housing and public health. There are continuous references to these problems throughout the Minute Books up until the late 19th century. In August 1858 the relieving officer, Mr. Mahony, visited Ringville where he found 'several dwelling houses and premises adjoining very unclean and in an unwholesome condition.'

The secretary of the Ringville Dispensary wrote to the Guardians in November 1859 looking for a second dispensary due to the large population and the extensive number of applications for tickets from the aged and infirm. The Guardians refused the request. In February 1860 the management of the Ringville dispensary district decided to rent a room as a dispensary depot. The room was rented from John Murphy at £2 per annum and he was employed as caretaker at six shillings and six pence a quarter.

In November 1871 the Medical Officer submitted a report to the Guardians on the Ringville district. He recommended improvements at Ballinagoul Upper and Lower and at Helvick, areas which were 'very thickly inhabited by a young population.'  To illustrate his point he told how he had just attended a poor woman in childbirth at Upper Helvick and that he had difficulty getting to the cabin as he had to wade through a 'slough of mire and filth.'

In September 1872, the Medical Officer Dr. Richard Graves, [1] reported on the Ringville district. He stated that there had been 38 cases of scarlet fever of a very malignant type. All the patients were treated in their homes as they had refused to enter the Workhouse infirmary. Dr. Graves warned that unless the cesspools, dung heaps and fish garbage were removed from the houses, disease would remain a constant problem.

The Villiers Stuart family owned much of the property in the area and were always considered to have been good landlords. At their meeting in August 1882 the Guardians expressed their shock at the rumour that Henry Windsor Villiers Stuart [2] had to have armed police escort him to his house at Dromana. It is interesting to note that he was the landlord most frequently mentioned in the Minute Books issuing eviction notices to his tenants.

The Dungarvan Monthly Illustrated Journal of 1883 carried a detailed profile of Villiers Stuart which included the following piece:

'Deeply impressed with the almost uninhabitable condition of the houses in which the poor labourer is too often compelled to dwell, he has set himself to the task of endeavouring to have them furnished with a better class of houses, and at this moment there is a competition at the Cork Exhibition for a £50 prize, which Mr. Stuart has generously given for the best model of a labourer's cottage.'

In spite of these sentiments it seems not much of an effort was made to improve the miserable housing conditions of his own tenants at Ring and Helvick.  In 1886 Dr. Graves made a report on the Ringville area. In it he listed those who were keeping pigs in their houses. Graves was amused and concluded by observing that 'several of whom, (pigs) in the course of my inspection, I found comfortably asleep, being integral members of the family household.'

Graves submitted a further report in September 1889 concerning the villages of Ballinagoul More and Beg, Knockenpower and Ring: 'the number of poor tenement houses in occupation in these villages is 77, of which 14 consist of but one apartment used in common in the kitchen and sleeping place, some of which are quite unfit for human habitation, and merely afford shelter to the inmates from wet and cold, being devoid of windows or chimneys, only a hole in the thatch to let out smoke.' Graves suggested that a metal tube be used as a chimney to allow smoke and stale air to escape. He described a group of about 30 houses at Lower Helvick and Ballyreilly as a worse class of cabins than those at Ballinagoul. All but two of this group were the property of Villiers Stuart.

Later that month a Dr. Clements compiled a similar report on Ballinagoul. According to him there were 90 houses and a population of over 500:

'With one exception the houses in the village are all one storey thatched cabins. Each generally consists of two apartments, the common kitchen and the sleeping place - In the sleeping place the beds are crowded together as much as the space will admit, there is no chimney or other opening...and the small four-paned window is unopening and sealed virtually tight. The general arrangement of the houses is irregular, there is a small causeway along the side of the house in front, it is on this that the slops and the waste water are thrown...Dr. Graves considers it would be of great advantage to divert a portion of the stream at the head of the glen and allow it to come down this channel.'

To prevent the frequent cases of typhus the Guardians decided that any fever patients should be sent in to the hospital in the Workhouse. The houses were to be whitewashed and disinfected and a 'scavenger' appointed to keep the channel free of dirt etc. The windows in the sleeping areas of the houses were to be repaired so that they could easily be opened.

In December 1889 Dr. Graves submitted a report on a fatal case of Typhus fever at Upper Helvick:

'The wife of a fisherman named Kelly - The woman was ill 10 days before I was called to visit her, when I saw her she was in a state of collapse, and died in 12 hours after - I trace the cause both to contagion and unpure surroundings...the husband has taken a summary method of getting rid of the infected bed clothes and bedding by throwing them over a cliff into the sea, and I am informed that he burned the clothes his poor wife wore. I had the cabin disinfected with sulphurous acid gas and chlorine, but would recommend that the house be whitewashed with quicklime and chloride of lime. There is a cluster of bad cabins in this small village which I think it would be very desirable to have limewashed.'

Many of the larger landowners had made provision to provide decent housing for their labourers but the smaller farmers had not made many improvements. The Labourer's Cottages & Allotments Act of 1882 authorised the Land Commission to order farmers whose rents had been fixed under the legislation of the previous year to improve existing or build new cottages for their workers. If the farmers did not carry out these improvements within six months they could be brought to court. There was a £1 fine for each week after that date if improvements were not done. The new cottages were financed with cheap loans from the Board of Works under the Land Improvement Acts.

In spite of the threat of  fines there was a strong resistance among farmers to carrying out the works. Part of the problem was that if the labourers failed to prosecute, the responsibility lay with the Guardians who were largely composed of landowners and farmers who were unlikely to support the labourers. There were not many prosecutions around the country and farmers could avoid it by evicting their labourers. The Boards of Guardians could authorise the building of new cottages but the farmers often refused to provide suitable sites.

In November 1883 committees were established in each division of Dungarvan Union to consider suitable sites for the building of labourer's cottages. P. Walsh, M. Walsh and J. Coughlan were appointed to the Divisions of Dromana, Dromore and Kereen. John Mulcahy, Anthony Power and John Crotty for Seskinane, Coumaraglin and Knockaunbrandaun. M. Carthy, Roger McGrath and a Mr. Landers for Carriglea. Captain Dawson and Mr. Condon for Colligan. Dr. Meany, Green and Curran for Ballinacourty and Dungarvan.

The Clerk was asked to advertise for a plan of a twin cottage and a single cottage, each to contain a kitchen and two bedrooms. They were to be constructed of stone and mortar with a piggery, privy and ashpit in each. A four foot double or single fence enclosed ½ an acre around the cottage. Mr. Fitzgerald of Lismore designed the twin cottage and Mr. Barr the single cottage. Fitzgerald's double cottage cost £56.10.0 to build. By June 1888 31 cottages had been built in the Dungarvan Union at a cost of £1,700. The tenants paid three shillings and seven pence a month rent.

An account by a visitor to Dungarvan published in a local journal in 1883 records the economic and bad physical appearance of the town at this time: 'In a town of 6,306 inhabitants...we never saw worse roads, dirtier streets, or such numbers of small cabins unfit for human habitation, not to speak of the few street lamps, lit with oil, in this nineteenth century! Commercially Dungarvan is not what it once was, the number of large empty stores and dilapidated buildings would alone be sufficient to prove this, if proof were needed. Her fisheries, once a source of enormous wealth, are now comparatively neglected...Emigration has carried off the bone and sinew of Dungarvan; the Workhouse is full, the rates are high and there are many starving poor in the numerous wretched little cabins.'