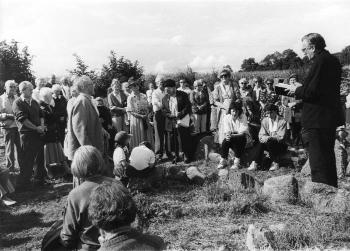 Most people will associate the site at Reilig An tSléibhe, Pulla, as the main Famine burial ground in the Dungarvan area. However, before that site was acquired Kilrush was the usual location for burials of those who died in the Workhouse This ancient graveyard is situated in the middle of a field in the townland of Kilrush to the North-West of the town. It has the remains of a tiny Early Christian church. Kilrush was also the common burial ground for strangers and others who had no family or friends to claim them.

On 29 April 1847 the Master reported that Kilrush graveyard was full and that a visiting committee would report on its condition. The Workhouse chaplain, Father Jeremiah Halley P.P., submitted the following report: 'I beg to call the attention of the Board to the method of burial in the churchyard of Kilrush. The people of that locality complain that the graves are not of sufficient depth, and fear that the effluvia will tend to the spread of contagion...on inquiry I find that the average depth of the graves is but 3 feet, thus having but almost 18 inches of earth over the coffin...should the present Famine continue even for 6 months, there will not be sufficient space in the Burial Ground.'

On 6 May the Master reported that Kilrush was full. Lord Stuart de Decies ordered that future burials would take place 'in that part of the consecrated ground not hitherto made use of for this purpose.' On 13 May the Master urged that something be done about the conditions at Kilrush: 'people are obliged to be disinterred for the purpose of interring others.' Towards the end of the month he tried to have an inmate buried there but was 'violently opposed' by the locals. He suggested that the Guardians contact Archdeacon Power and the land agent, Mr. Roberts about the problem.

By early June the situation had become desperate and the Master warned that the dead would have to be left above ground unless a suitable site for a new graveyard could be acquired immediately. The Guardians solved their problem towards the end of June when Henry Villiers Stuart offered them two acres of land rent free at Slievegrine. In 1879 the Dungarvan Town Commissioners wrote to the Guardians informing them that Kilrush graveyard was overcrowded and that in future the Workhouse inmates should be buried at Slievegrine. This infers that Kilrush graveyard was again in use at some stage after the Famine. 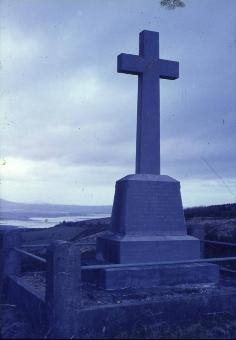 This land is situated about 2½ miles South-West of Dungarvan. In July 1847 the Clerk was directed to advertise for contractors to erect a stone wall around the site, four feet high and five feet wide, faced with stones on both sides 'the stones to be laid on edge.' Two men were employed assisted by the Workhouse inmates. On 28 August William Veale's tender to make an iron gate 5½ feet high by 8 feet wide for 14 shillings was accepted. The graveyard was to be ready in a matter of weeks.

In early September the Guardians ordered that any paupers who died were to be buried in the new graveyard for Grange and Ardmore until the site at Slievegrine was opened.

On 18 November the Master asked that alternative employment be provided for the able-bodied men as the graveyard at Slievegrine would be sub-soiled in nine or ten days. We can assume from this that the graveyard at Slievegrine opened about the end of November 1847. In some Unions the Guardians were forced to use the Workhouse grounds as temporary graveyards. We do not know if this was the case in Dungarvan. Father Patrick Toomy (1799-1867) a member of the local Augustinian order, was long remembered for the work he did during the Famine. It was said that he used to wait at the back gate of the Workhouse when the carts carrying the dead were being removed. Having checked the corpses to ensure they were dead he blessed them with water from a nearby holy well. He died in 1867 and was buried within the church in St. Augustine Street, Dungarvan. 1

The Kett family who lived next to the graveyard at Slievegrine were caretakers for many years. In 1866 Denis Kett was employed as caretaker and in the 1870s John Kett received 15 shillings as a half years salary. He was still employed in the 1890s.

The Poor Law Commissioners contacted the Guardians wishing to learn what the monument was for. The Guardians informed them that it was to be built to 'compliment the Right Hon. Lord Stuart de Decies, who has given the burial ground, as well as to commemorate the memory of those whose ashes lie buried there.' The Commissioners were unhappy with this explanation, probably because the Guardians main purpose appeared to be to commemorate Villiers Stuart.

Denis McGrath's plan for the monument was accepted in August 1866 but the Commissioners objected once again. The plan was eventually dropped, probably because of the opposition from the Commissioners. According to Seamus Clandillon writing in 1925 a wooden cross marked the site. He recalled the story of a woman who was being taken for burial to Reilig An tSléibhe who regained consciousness and lived to a good old age. It was not until 1953 that a monument was finally erected at Slievegrine. The unveiling took place as part of the celebrations of the An Tostal festival in Dungarvan on Sunday 19 April 1953. This monument consists of a large plain limestone cross with inscriptions in Irish and English. However, the main part of the inscription refers to the Marian Year with the reference to the Famine victims given less emphasis.

On 20 August 1995 a commemorative mass was celebrated at Reilig An tSléibhe by Dr. William Lee, Bishop of Waterford and Lismore. A moving recital of Na Prataí Dubha was given by Peig, Bean Uí Reagáin. The old limestone cross was cleaned and a more fitting memorial to those buried there was unveiled.

This is situated at the entrance of the former site of Waterford Foods on the by-pass road at Shandon. The landscape has changed since the mid 19th century when it would have been in a marsh enclosed by a wall and surrounded by a deep trench.

It was opened in 1832 as a burial ground for the victims of an outbreak of Asiatic Cholera. The simple cross and engraved metal plaques were erected later by surgeon Henry Anthony of Dungarvan.  It is probable that it was re-opened during the Famine because of the shortage of burial ground.