The 20th. Century
Councillor Mike Byrne was a member of the 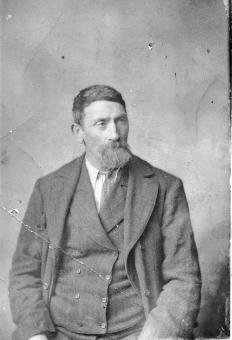 Dungarvan Board of Guardians from 1913 to 1917. He was unhappy with the living conditions of the Workhouse inmates and set about persuading the authorities to initiate improvements. He obtained an ounce of tobacco per week for each of the men and an ounce of snuff for each of the women, a concession which apparently made news all over Ireland. However, he is chiefly remembered for having the brand removed from the clothes of the inmates. As a result of this all the other Unions in Ireland followed suit.

A plaque was erected in his memory on the front of the Town hall in St. Augustine Street with the following inscription: 'Councillor Michael Byrne, R.I.P., member of the Dungarvan Urban District Council 1908 - 1918 and Board of Guardians 1913 - 1917. In grateful remembrance of his untiring and successful efforts to secure concessions and comforts for the inmates of these institutions under the control of the Board. He spent his public life fighting for the interests of his fellow workers. Ar Dheis Dé Go Raibh a Anam. Erected by the Dungarvan Council of Trade Unions.'

In 1920 Dáil Éireann recommended that the Poor Law Boards should sever their connection with the United Kingdom Local Government Board. Several emotive resolutions were passed by the Dungarvan Board of Guardians at this time. On 9 March they passed a resolution condemning the English Chief Secretary in Ireland for attempting to introduce a new Education Bill. The Guardians felt that it was unsuitable for the 'Catholic people of Ireland' who had throughout 'England's tyrannical reign in Ireland' preferred their religious teaching 'to the Soup Kitchens and defy now as then the dungeon, fire or sword of their oppressors.'

A further resolution on 13 April referred to attempts by the British Government to 'bring about the deaths of hundreds of the bravest and best' in Mountjoy and other prisons. They wanted to draw the attention of the French and American governments to the 'Holocaust' taking place in Ireland.

At a meeting on 11 June 1920 the Guardians transferred their allegiance to Dáil Éireann: 'That this council of the elected representatives of the Dungarvan Rural District Council, at a duly convened meeting, hereby acknowledge the authority of Dáil Éireann as the duly authorised Government of the Irish people, and formally undertake to give effect to all decrees duly promulgated by the said Dáil Éireann.' In the weeks following they gradually ceased communicating with the Local Government Board. On 22 June they decided that they would not submit returns concerning the rates, lists of ratepayers, salaries of staff etc.

The Dungarvan Board of Guardians also renewed their interest in the Irish language by passing several resolutions in Irish and insisting that any future job applicants would have to have a good knowledge of Irish in keeping with Sinn Féin policy.
On 20 September the Guardians passed a resolution ceasing all communication with the English Local Government Board and stating that in future they would send their minutes to the Local Government Department of Dáil Éireann. They also cancelled the appointment of the National Bank as Treasurers to the Union.

In November the Guardians appointed May Guiry as nightnurse. However, there was an objection to her appointment by a group called An Coiste Cheanntair Na nDéise. They reminded the Guardians that they had passed a resolution stating that any job applicants would require Irish and that they had no idea if Miss Guiry had any knowledge of the language. They also claimed that a person with a certificate in Irish from Ring College had been passed over for the job. The Guardians would have let the matter rest but they received a letter from the Local Government Department insisting that Miss Guiry should have a knowledge of Irish or they would not sanction her appointment. As a result of this the Guardians appointed Seamus Hogh of Ring College as examiner for any future job applicants. Miss Guiry sat her exam with Hogh and passed.

Demise of the Union

In 1908 the Old Age Pensions act was brought into force by the Chancellor of the Exchequer, David Lloyd George. He also introduced the National Health Insurance Act of 1911. Winston Churchill, President of the Board of Trade (1908 - 1910), instituted employment exchanges during his tenure of that position. These three measures combined, reduced the necessity of people to rely on the dubious facilities provided by the Workhouse system. The First Dáil of 1919 pledged itself to abolish the Poor Law System - 'substituting therefor a sympathetic native scheme for the care of the nation's aged and infirm, who shall no longer be regarded as a burden, but rather entitled to the nation's gratitude and consideration.' The Local Government Act of 1923 re-organised the Poor Relief system by amalgamating the Unions within a County Administration structure. Kilmacthomas Workhouse had closed in 1919 and with the passing of this act the Unions within Waterford passed out of existence.

After a period of some 80 years the Dungarvan Union was abolished. If anyone mourned its passing, they mourned alone.