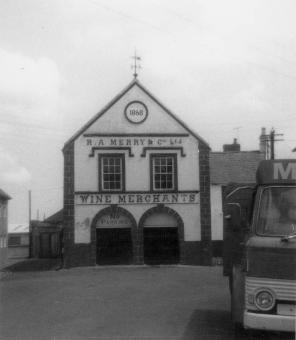 This is one of Dungarvan 's most historic buildings. Its distinctive black & white facade terminates the view at the end of Main Street. The building was originally designed as a Market House, (an open arcade on the ground floor) with the Corporation Chambers overhead.

A charter of 1610 issued by James 2nd instructed the Corporation to erect a stone Guild Hall as soon as possible. A Town Hall was in existence in 1642, when its capture is recorded. The present building probably incorporates part of this earlier structure.

By the mid 19th. century the building was owned by The Duke of Devonshire. Griffith's Valuation 1851 refers to the Market House & Butter-Crane, the latter was leased to Beresford Boate.

The Duke sold the Market House along with the rest of his Dungarvan Estate in 1861. The Market House was purchased by John R. Dower. The latter sold it to Robert A. Merry c. 1868, who used it as a wine store & offices.

According to local tradition, Edmond Power, of Ballygagin a United Irishman, was hanged from one of the front windows in 1799.