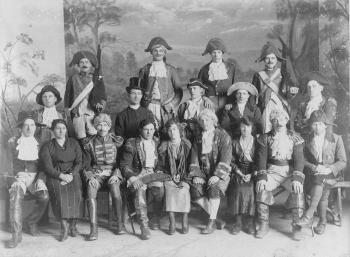 The first floor of the Town Hall building was laid out as a theatre. Local dramatic and operatic societies such as, Carrick Play Company, Midleton Dramatic Society and the Dungarvan Literacy Society. Many of the notable opera companies performed in the Town Hall such as; The Walsh Opera Company, The National Opera Company, The Redding Opera Company, Esther Grimes Opera Company, The Bowyer-West Opera Company. They were lectures and music recitals by local and visiting musicians. Many dances were held there including the Hunt Ball. For the supper dances the main meal was served on the ground floor. This area had to be specially prepared because it was normally used as Joe Foley's chicken store. The interior had whitewashed walls and entry was through an archway with an iron gate.
This is an example of the type of events which took place in the Town Hall for the year of 1898.

The well known Dungarvan song writer Mai O'Higgins recalled these supper dances in an interview with journalist Tom Tobin (in the Cork Weekly Examiner, 28 May 1981) :
We had a carpet of straw and whatever decorations there were could be seen blowing in the draughts that are all over the place. Still, it should be said that those of us who have wined and dined far and wide never found anything that tasted as good as the suppers in the old Town Hall of Dungarvan - suppers that we ate off the top paper-covered boards and we always had lashings of that good food.

Dress dances and supper dances in those days were expensive at £1 a head but as I said they were wonderful. Mention of the Town Hall reminds me of the great shows that were so much a part of our lives as young ones. The first thing would be Mikey Wyse going around with the bell. You just stopped and listened to what was coming to town and when Mikey had the attention of enough people, he would stop on the footpath and announce the details. He was the official Town Crier, billposter and publicity agent of the old school and he did a tremendous job. We were lucky as children because we had regular appearances of Anew McMaster and the other drama groups. We had all the great opera companies appearing in Dungarvan before we could read or write. We had the variety shows and, indeed, you could say that there was plenty of good entertainment in those days.

The Dungarvan Observer of 1927 published an advert concerning a visit of Anew McMaster and his drama company for six days at the Town Hall. They presented six of Shakespeare's plays:- Macbeth, Othello, The Merchant of Venice, The Bells, (followed by scenes of Romeo and Juliet), Hamlet, The Taming of the Shrew.