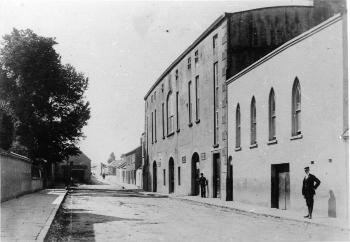 In March 1875 the Augustinian Prior, Rev. Williams wrote to the Town Commissioners requesting them to let the theatre in the Town Hall as a school room for £12 a year. At their meeting of 5 April 1875 the Commissioners passed the following resolution:-

'The deputation appointed by this Board to confer with the Rev. Williams as to his getting the use of the Town Hall as a school room, having made their favour of letting it, it is now proposed by Mr. T Williams and seconded by Mr. Richard Phelan, that the large room in the Town Hall be let to the Rev. Williams or the Prior for the time being of the Augustinian Convent here, to be used as a school room between the hours of half past nine a.m. and half past three p.m. daily, tenancy to be monthly rent of £1 per month.The Commissioners reserve to themselves the right to use the Town Hall at all times for public meetings and to allow the managers of the Operas or Theatres to have rehearsals for an hour or an hour and a half occassionally during school hours.'

In May 1880 the Rev. William P. Dundon wrote the following letter to the Town Commissioners :

'Gentlemen, I hereby give notice that I shall remove the school from the Town Hall to a suitable position. I have to take this step on account of the frequent interruptions to the buisness and having had to allow boys home on several occasions before time, which caused the parents in many cases to make complaints.'

The Augustinians built a new school next to their house in Main Street just across the road forom the Town Hall.