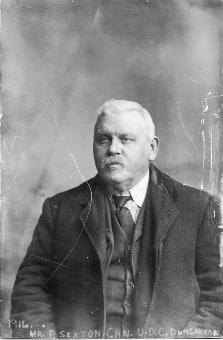 1904
The U.D.C. (Urban District Council) ordered that the fire engine be put in storage on the ground floor of the Town Hall. The no.1 store was let to Mr. Paxman Lismore, the butter merchant who vacated it in 1913. The no.2 store was kept for harbour equipment.

1919
Sheehan & Co. had vacated the middle portion of the Town Hall and it was then that the U.D.C. ordered that this area be kept exclusively for the fire engine.

1922
In December 1922 a local branch of the Evicted Tenants Association was founded at a meeting in the Town Hall.

1930
In May 1930 the U.D.C. adopted the Public Libraries Act (Ireland). The Library committee was offered the Sinn Fein room in the Town Hall at five shillings a week.

The Present Day
The U.D.C. vacated the building on 16 April 1999 and moved to the new offices in the Civic Building. The ground floor was converted and is now the home of the Waterford County Museum Society. The Museum will open in the year 2000.