10. Sports, Pastimes & Events
Previous Page | Next Page
Tallow Horse Fair
The most noted annual event in the history of Tallow is "Tallow Horse Fair". It was founded in 1910 and has been the veritable Mecca for the two essential groupings necessary to an event of the kind - Sellers and Buyers. The town is transformed into an encampment of numerous caravans. It has been the custom of the knights of the road to hold a fair of their own in the afternoon. Trafficking their piebalds, greys and bays and frequently enlivening the proceedings to the extent of keeping the peace preservers busy. Many famous horses have been bought and sold at the fair. 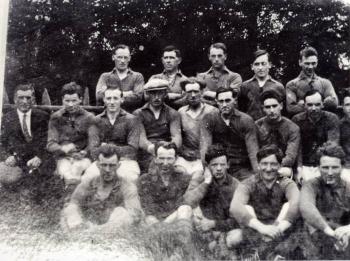 Tallow G.A.A.
According to some of the elders in the local G.A.A. the original Tallow club was founded by a Kerryman, Kelly-Lynch. He started a football team here called the "Faughaballas". As far as we can ascertain Tom Doyle (Dave Doyle's father) was on the first team. The first secretary was a Mr. O'Leary, brother of Mr. Frank O'Leary N.T.

Waterford Senior Hurling 1959:
Eamonn de Paor played with victorious Waterford team. He was local School Principal in Tallow and over the years has given the benefit of his skill and prowess to the boys and girls who were fortunate enough to be pupils of his.

Athletics
From 1970 - 1987 a very dedicated husband and wife team gave all their free time to helping and encouraging athletics among the young people of the locality - they were Mr. & Mrs. Leonard Frazer. Children from Tallow competed at the Community Games finals in Mosney and won many medals.