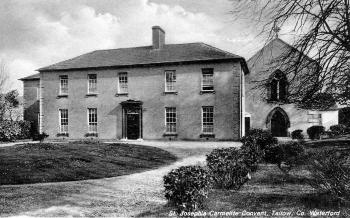 1836 - A memorable year for Tallow. The foundation on the 29th of July 1836 of the Carmelite Monastery of St. Joseph. The parish is indebted to the bequest of Rev. Denis O'Donnell P.P. of Tallow who, at his death left a considerable sum for such a purpose.

Situated at the north side of the town on a site of two acres presented by the Duke of Devonshire, the Convent has been over the years, a haven of spiritual and temporal refuge, for not only the local population, but for all who sought help and comfort, from far and near. Fr. O'Donnell's pious design was realised by his successor, Rev. Fr. Eugene Condon. Having failed to procure a foundation of the Presentation Order, Father Condon, early in 1836 made application to the Carmelite Convent, Warrenmount, Dublin. This resulted in the dispatch of five Carmelite Religious Orders; under Mother Joseph of Jesus Finn, to open a foundation at Tallow.

The community quickly grew in numbers, the first postulant being the niece of the Parish Priest. From the beginning the nuns took charge of the Girl's National School. School work and similar occupations are alien to the spirit of a purely contemplative order, but it was necessary for someone to teach the local girls, and the nuns undertook the task. In 1910 the community resigned the school, and it was handed over to lay teachers. At one period the nuns conducted a school of industry in which grown-up girls found employment in making Tallow lace. As fashions changed, demand for lace died out, and the school was abandoned.