Table Of Contents
The Odells
1.
The Bagges
2.
Ardo House
3. 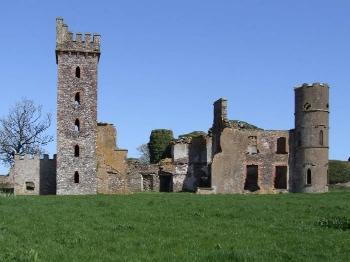 A very interesting account of Ardo House (by W. Fraher) appears in the 1990 issue of the Ardmore Journal. He says, "One of the earliest references to Ardo appears in the Civil Survey 1654-56. The proprietor's name was James Fzt Gerald gent, Irish papist. The property consisted of 280 acres and was valued at £23.15.0.

Local tradition records that a family named Costen was associated with the house in the 17th century. There appears to have been several subsequent owners and it was acquired in the later 17th century by Sir Francis Prendergast. Fascinating and sinister stories have been told about the place. One story tells of the young heir being wrongfully accused of appropriating valuable silver. He fled and was pursued and died on the cliff since called Croch an Oidhre (The Heir's Gibbet) having been hanged by his pursuers, or his horse failed to make the jump and he was caught and hanged in the reins. This story is well known but we do not know to what particular period if refers.

Much of our information on the history of Ardo is in an article written by Frances Currey of Lismore and published in 1853. The Coghlans of Ardo are listed as one of the principal families of Co. Waterford in 1710. "Henry Coughlan of Ardo, High Sheriff 1776 married to a widow Lindsay of the Co. Tipperary" appears on a list of the principal gentry of the county in 1775, compiled by the Right Hon. George Ponsonby.

The Coughlans must have fallen on evil days. There are several accounts of the Widow Coughlan and her smuggling activities, of her two handicapped children and her two beautiful daughters. One daughter became Lady Barrymore and her sister Eliza went to live with her in London, where she met the widowed emigré Duc de Castries and married him and returned with him to France after the Revolution. The Castries family was-and still is-a prominent French family. At the coronation of Louis 18th in Notre Dame cathedral in Paris, Eliza as the Duchess de Castries occupied a seat of honour. She never came back to Ardo.

Lewis' Topographical Dictionary of Ireland 1837 described the property as 'Ardo, the residence of P Lawlor…… a castellated mansion'. By the late 1830's, the Lawlors were gone from Ardo. Griffiths Valuation for co. Waterford 1848-51 notes the house as vacant and in the possession of the Directors of the National Bank. The house and offices are valued at only £1.15.0 which indicates it must have been in bad repair. A garden was occupied by the Directors of the National Bank but was owned by the Duc de Castries. The Duc also had four lots of land and an orchard valued at £103 and occupied by the Bank.

The Ardo estate came into the de Castries family through the marriage of Eliza Coghlan of Ardo and the Duc de Castries. It was later acquired by Marshal McMahon (President and Marshal of France in 1873) on his marriage to Elizabeth, daughter and heiress of the Duc de Castries (Marshal McMahon i.e. The Duc de Magenta deserves special mention and is dealt with by Renagh Holohan in her book, The Irish Chateaux; In Search of Descendants of the Wild Geese". The Ardo connection is mentioned.)

In 1985, my son, my sister and I were on a tour in southern France and visited the Tourist Office in Montpellier and happened by chance on a brochure of Castries, so went to visit it. There was an enormous chateau with appropriate gardens and we were shown through the various apartments. In one place, were photographs of the family with the pope, also with the present Queen-Mother who had visited them. There was a large portrait of Marshal McMahon.

It was Marshal McMahon who put the Ardo property up for sale, and Sir Joseph McKenna was the buyer. The McKenna family (who took over Ardo in 1865) was a distinguished one too. Sir Joseph (he was knighted in August 1867) was a nationalist M.P. for Youghal 1865 - 68 and from 1874 - 1885, later for Monaghan. He had been born in Dublin in 1819, was educated at Trinity College and called to the Bar in 1848. The family was very proud of its connection with St. Oliver Plunkett through Sir Joseph's mother. (A nephew of Sir Joseph's, Reginald McKenna had a most distinguished career in English politics, having been Hon. Sec, to the Treasury, President of the Board of Education, Home Secretary; succeeded Churchill as First Lord of the Admiralty and finally became Chancellor of the Exchequer under Asquith). Sir Joseph married in 1842, Esther Lousia Horne of Dublin who died in 1871 and Tony Collis her great grandson says she is buried with her young daughter in Ardmore graveyard. There is a set of purple vestments in Ardmore Church, made from a ball-gown of Lady McKennas.

The tenure of the McKennas seemed to have initiated a period of refurbishment and prosperity at Ardo. Frances Curry (mentioned previously) talks in 1895 "of the scrupulously white washed walls, gleaming brilliantly in the sun". In fact, those years from the 1860's to the 1920's seem to have been the heyday of Ardo House. The photographs of the early 20th century show a delightful family home, well looked after as were the splendid out-offices of the adjoining farm. It exuded an air of prosperity and contentment.

The late Deug Connell (later to become owner of the place) spoke of a big ball given in Ardo (probably in the early part of the century) when the whole avenue beginning at the approach near his house, was lighted up with lanterns. That must have been the same one of which Mrs Pollock spoke, her daughter, Mrs Dowson told of her father and mother bringing up cold sweets (refrigeration would have been a problem in those days), dancing all night and walking home at dawn. Mrs Dowson also spoke of going on one occasion with her father to visit Sir Joseph who was sitting up in bed wearing his tall hat. He died on 15th August 1906. He had re-married and the second Lady McKenna died in July 1907. Both were buried in a vault in an adjoining field with a large stone angel on guard. Now the place is covered with briars. The lady had been noted for her dedication to the Prevention of Cruelty to Animals and the family was always resentful of the fact that this society got most of the McKenna money and the place was not viable.

Sir Joseph McKenna had ten children six girls and four boys from his first marriage. One of his daughters married a grandson of Daniel O'Connell. Another daughter Magdalen Mary aged 13 is buried in the Ardmore graveyard, as also is Kathleen Elizabeth McKenna wife of Joseph (who inherited the place) in 1918. Members of the family lived there for some years before going to England, Madeline who later became Mrs Collis was one of them.

For a period in 1920-21 it was let during the summer to the committee of Coláiste Deuglán, so her father Joseph McKenna had vacated the house by then. There was no caretaker and the place was looted, eventually sold and deprived of its roof, so the final period of its desolation began.

The Collis family (3 sons, Guy, Tony and Terrence) returned to Ardmore, bought Melrose and used it as a guesthouse in the late 30's, early 40's). They returned to England in the mid 40's (Martin Hurley, my father bought Melrose and there I spent the first ten years of my married life). Guy was in an anti-partition league in England, moved to Leicester and became Lord Mayor of that city and was in frequent communication with me until his death a few years ago.