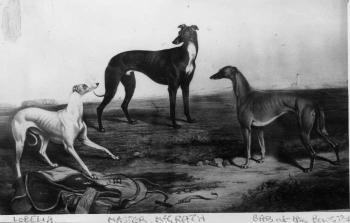 As with many legendary greyhounds various tales about the Master's upbringing abound. Owned by the sporting Irishman, Lord Lurgan, the young M'Grath was said to have been found as an abandoned orphan, tied in a sack, floating in a Waterford river. This was certainly the most common myth to emerge in later years, and is totally without foundation. As the record books show, the Master was bred on Lord Lurgan's estate in County Armagh, Ireland, from a combination of the Newmarket and Lancashire strains. His sire was a foremost coursing dog named Dervock, his dam a very fast bitch named Lady Sara.

In 1869 Master M'Grath was entered again for the Waterloo Cup and it is said that many thousands of people attended the event in anticipation of another win by the outstanding black dog with the flashy white chest.

The Master wasn't to disappoint but it was a close run thing. In the final course he was matched stride for stride by the Scottish bitch Bab-at-the-Bowster and snatched victory in a very tight finish. It is said that Bab was the equal of the Master but had expended too much energy seeing off another very fast bitch, Lady Lyons. All who witnessed the event described it as a truly classic course between the two premium greyhounds of the era. Bab was considered by many to the best greyhound of the 19th Century and went on to win 62 courses, but never succeeded in adding the Waterloo Cup to her numerous trophies.