5. The Heart Of A Man
Previous Page | 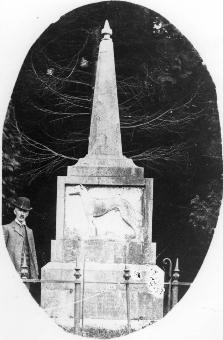 And so the "Mighty" M'Grath went back to Ireland in order to spend the rest of his years in retirement - but this was not to be. He died prematurely on Christmas Eve that same year (1871) of pneumonia - a legacy perhaps of that terrible moment when he fell into the freezing water of the river Alt.

All of Ireland mourned his passing and many Christmases were spoiled as the news of his death swept across the land. Lord Lurgan requested an autopsy and this revealed that the Master possessed a heart as big as a man's. It was twice the size of a normal greyhound of his weight and this probably accounts for his tremendous stamina in the coursing field.

His outstanding career was not to be forgotten. A commemorative monument was erected close to his birthplace although it is unclear whether the great dog is actually buried there, as county records neither confirm nor deny this. The Brownlow family (of Brownlow Cup fame) had the Master incorporated in their family crest and the dog was also to be commemorated on a special edition of the Irish sixpenny coin. In later years he was immortalised first in poetry and then in song and a copy of this popular Irish ballad can be found on the back of the menu at "Master M'Grath's" restaurant, Seabrook, New Hampshire, USA. The heading on the menu says simply: "Master M'Grath the greatest greyhound that ever lived. His passing 1871."

In his short lifetime he contested 36 courses and lost only one. Thrice winner of the Waterloo Cup he really was "Mighty" in every sense of the word and you'd be hard pushed to find a more fitting epitaph.