5. The Military & Black And Tans
Previous Page | Next Page
Extract From Keohan's History - by Edmond Keohan - Military and Black-and-Tans 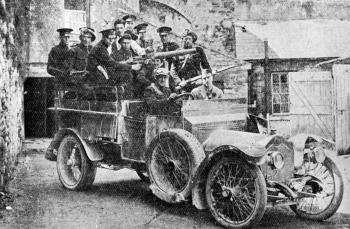 But for two years previous to the evacuation the old Castle had been occupied by other forces than the R.I.C. When the Irish struggle was at its fiercest a body of military came to town and took up their quarters in the Castle along with the R.I.C. Then came the Black-and-Tans. The Black-and-Tans were ex-soldiers of the Great War who volunteered for service in Ireland at good pay, the latter inducement being so generous that the Government was flooded with applications. The situation in Ireland was desperate. The Rising of the Republican Army had taken place in Dublin in Easter week of 1916. After a desperate and bloody struggle a number of the Republican leaders were taken prisoners and a good many of them executed. The executions, which followed morning after morning with brutal regularity, became so repugnant to the people, the young men were fired with indignation. The great majority of them joined the forces of the Irish Republican Army. Day after day the most daring deeds by them were reported. Evidently the country was getting out of hand, and it was with a view of suppressing this revolt against British rule that the Black-and-Tans were called into requisition.

The Irish are quick to give a name, and in this case that of the Black-and-Tans will live for ever in the history of the time. It appears they were organised so hurriedly, the occasion being one of great emergency, the Government were unable to supply them with the entire black uniforms, so under the black jacket they wore the military trousers of khaki. The uniform was a mongrel one, and the name Black-and-Tan was the result.

The military were removed from the Castle to a house in Church Street. The Black-and-Tans were installed with the R.I.C. in the barracks. Around the barracks barbed wire defences were erected. At night time no one was allowed to pass without being challenged by the sentry. It was the same in Church Street, and curfew was proclaimed. The military quarters in Church Street, as well as the old Castle, were in a state of siege, and the mails coming to the town were often seized by Republicans, and Government correspondence taken. In these circumstances the mails for the military were brought to the town by aeroplane.

Mails by Aeroplane
During the summer of 1921 it was a daily occurrence for the mails to be brought to the Castle by aeroplane. It was interesting to watch the evolutions of the machine as it descended in a spiral and dropped the mail bag into the Castle yard. On one occasion the bag dropped into the sea, but after a vigorous search it was discovered. At about mid-day every day the buzzing of the engine would be heard, and people craned their necks to get a sight of the machine, which would swoop around and around, sometimes coming close to the chimneys of the houses, but invariably circling over the Castle until the bag was dropped. When this was found, the aeroplane was signalled to and the machine con-tinued its flight in the direction of Waterford.

Activity in the Castle
During the year 1921, and for some months of 1922, the Castle of Dungarvan was the scene of much activity. Probably the events occurring at these times were as exciting as were those of any previous period, though the old Castle had witnessed many changes "by flood and field " since the day when first it was completed by the builder's hand. The conflict in Ireland raged most severe. Numbers of young Irishmen had joined the I.R.A. ranks, and the daily papers every morning were filled with reports of shootings and tragic occurrences in many parts of the country. When there would be a dearth of these happenings, the remark would be made, "There is no news to-day." And all the while raids on houses, both in town and country, were being carried out by the military.

Searches were being continually made for arms and documents, and it would seem that the policy of the rulers at the time was to strike terror into the people and make them as subject to British rule as before. Sir Hamar Greenwood occupied the post of Chief Secretary. The Irish had eighty-five National representatives in the House of Commons, and when one of them would ask a question as to events in Ireland he was answered by Sir Hamar in the most supercillious manner, and no satisfaction whatever was given to the Irish members. It may be truly said that at the time many people were terrorised and were very apprehensive as to how matters would end.

Prisoners were arrested almost daily and lodged in the barracks. But these were zealously attended to by the lady members of the Cumann na mBan, who carried to them provisions and ministered to their comforts by every means in their power. The lorries of the military would rush incessantly through the streets, carrying with them a machine-gun, the soldiers being armed with rifles pointing in every direction. Having made an incursion into the country, they would return with the same terrific speed, shoot down the Main Street, and lodge themselves in the barrack. Oftentimes rifle shots would be heard at night, and explanations would be sought for in the morning. The military were ever on the watch, for, owing to the guerilla warfare in vogue, they knew not where or when they would be attacked.

And all this time it was being whispered about that something out of the ordinary was going to happen, for, like to the clouds gathering in the sky preparatory to a storm, it was almost instinctively felt that some tragic occurrences were at hand.